You are here: Home>Archaeology>Tomb weeper Athenry 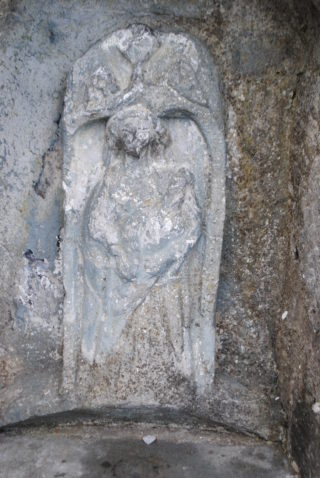 This feature incorporated into the fabric of Lady’s Well at Athenry consists of a somewhat worn effigy of a weeper from a late medieval tomb. It likely originated at the Dominican Friary or perhaps at St Mary’s parish church and was reused here as one of the stations associated with Lady’s Well. It’s survival informs us that an  elaborate late medieval wall tomb or perhaps free standing box tomb once adorned one of the churches in the medieval town of Athenry. These carved images generally referred to as weepers comprised mainly of saints associated with the order or perhaps was one familiar to the particular donor.