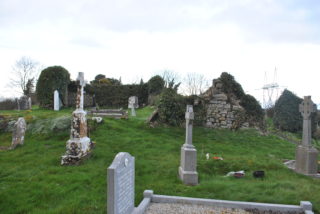 Tiranascragh parish is situated on the western bank of the River Shannon between the civil parishes of Fahy and Kilmalinoge. It is one of two civil parishes comprising the modern parish of Killimor. The derivation of the name Tiranascragh is topographical in nature coming from the Irish Tír Cinascraigh and is understood to mean the land at the head of the esker or sand ridge.[i]

The plot of ground surrounding the ruins of Tiranascragh church straddles the esker providing an elevated setting for the church and a dry but quite difficult terrain for its attendant graveyard. Its location at this point on the esker ridge suggests that it was built beside an earlier communications route. It is probable that the line of the adjacent road is an ancient one, and that it provided access to a fording point on the nearby River Shannon known as Whites Ford. It is also probably no coincidence that Longford Castle which was the caput of the O’ Madden, lords of Silanmchada for a considerable time, is close by and would have easy access to this route.  Indeed, it is even arguable they actually controlled the route, as their castle is sited on the side of the esker some five hundred metres north-west of the church. The earliest map of the parish that survives is that by drawn William Petty in 1685 as part of the so-called Down Survey.

While the earliest references to Tiranascragh that we find is when it appears in the Papal Taxation of 1302-6 as ‘Tirkynescragh’ and is valued at 10s. 4d. providing a tithe of 12¾ d.[i]  It is noted in a number of papal bulls as a vicarage belonging to the Deanery of Clonfert. Firstly, we hear about it in a bull of 1418[ii] which is addressed to

‘the precentor of Kilmacduagh. Mandate to collate and assign to Dermit Ohyrealeayn,perpetual vicar of Fachicomla in the diocese of Clonfert (who has lately had papal dispensation, as the son of a priest and an unmarried woman, to be promoted etc. as in   the preceding, after which he was promoted to all holy orders and obtained the above vicarage), the perpetual vicarage of Thyrheiscreach alias Bellan in the said diocese, value not exceeding 6 marks, void because Cornelius Ohyrelayn, clerk, of the said diocese, held it for more than a year without having himself ordained priest and without dispensation: notwithstanding that he holds the said vicarage of Fachicomla, which he is to resign upon obtaining that of Thyrheiscreach. Dignum etc.’

In 1426 we find a Dermicius Osyridean serving as vicar of the parish of (Thyrhrneascrach) Tiranascragh.[iii] The vicarages and perpetual vicars of Tiranascragh and Kilmalinoge are mentioned again in a papal bull of March 1466-7 which was addressed to ‘the dean and Cornelius Ocynaid, canon, of Clonfert and the official of the same’. It states that;

‘the pope having been informed by Thady Ohanyatan [O Hanrahan], canon of the    monastery of St. Mary de Portupuro, Clonfert, O.S.A., that of Odo Ohmyam [Hannon], canon of the said monastery, and Culaus Omaeladuni [Muldoon], perpetual   vicars of the parish churches of Tirneasgrach and Cillmulonog, respectively, in the diocese of Clonfert, the former has neglected to administer the sacraments of penance, Eucharist and Extreme Unction to several of his parishioners who were at the hour of death, and by his neglect has suffered them to die without them,   whilst the latter has openly committed fornication, even after lawful admonition,      dilapidated and converted to evil uses the goods of the said vicarage of Cyllmulonog, and has committed perjury), if Thady, who is a priest and has made his profession of       the said order, will accuse the said Odo and Culaus before the above three, to summon them and others concerned, and if they find the foregoing to be true, to deprive and remove them, and in that event to collate and assign the said vicarages, value not exceeding 3 and 2 marks sterling respectively, to Thady. The pope hereby specially dispenses him to receive and retain them together for life.[iv]

The regal visitations undertaken to determine the state of Clonfert Diocese c.1565-67 finds that a Donatus O Cormacayn (Cormican) is vicar of Tiranascragh at that time.[v] The Cormicans were a deeply influential family in Church affairs, and held various positions in different churches throughout the diocese.

O’Donovan has very little of any interest to say about the parish and provides only a very superficial account of the church itself, saying that, he ‘could find nothing curious about it but an ash tree extending its arms over the old walls in a picturesque manner’.[vi] While this information is of little use, it provides a possible clue as to how the building may have fallen into such as poor state of repair.

Both the first edition OS map 6” sheet 118 (1840s) and later (1890s) 25” sheet clearly depict the outline of an L plan church.  An examination of the surviving ruins at Tiranscragh shows a church that at one stage of its history consisted of a nave and relatively large north transept. The transept very likely functioned as a private chapel in the form of a chantry. It is tempting to suggest that this may have been an O’Madden chapel. Their presence nearby in Longford Castle makes them the most likely candidates. A piscina incorporated into a wall in a reused position in an upper chamber of Longford Castle does, however, suggest that the family maintained a private chapel for their own use in the castle. This however, would not have precluded them from having an independent chantry chapel for burying their dead in the parish church. In fact, it arguably enhanced their position and status as local Gaelic lords.

A break in the upper section of the east wall of the transept, suggests that there was originally a window in this position. An altar would also have been present in this location in order for the structure to function as a chapel; though no physical evidence of either feature survives. Due to its poor state of preservation most of the south wall of the nave has collapsed outwards making it impossible to determine the number or position of its windows.  However, a doorway of late medieval date is evident in this wall by the survival in-situ of the moulded base of its lower west jamb. The west gable has also disappeared. All that stands of the church are part of the north wall, the north transept and a portion of an independent structure added on at a later date to the eastern end of the church. This latter portion, as can be seen from a limestone plaque fitted in the east wall, was built by Francis Madden of Eyrecourt, for use as the private burial place of his family (Fig. 3). O’Donovan notes this and says that it was built by ‘a family of the ancient Siol-Anmchadhas (O’Maddens) the former aristocrats of the district’.[vii] A high status grave-slab of seventeenth-century style, which dates to 1732 was recently discovered within the church by the writer. This grave-slab bears an ornately carved cross with fleur-de-lis terminals. The inscription is executed in raised lettering and bears the names of a local family called Boughan. Descendants of the family still survive in the parish. While they do not appear in any church records, it is obvious that they were a well off family who may perhaps have enjoyed special burial rights here. This type of grave-slab is interesting to find as it illustrates the use of particular styles and motifs over an extended time-period. But for the date of 1732 inscribed on the stone, it could easily be taken for a seventeenth-century slab.

A fragment of dressed masonry that probably originated from a late medieval door jam survives within the graveyard to the north of the church; its presence here suggests that it may have functioned at one time as a makeshift grave-marker. Interestingly there are no medieval gravestones or any other material remains associated with parish church status evident on the site. One would generally expect to find fragments of window moulding or perhaps an arch stone from the main doorway.

[i] Henry Sweetman Calendar of Documents relating to Ireland (1875).

[vi] M. O’Flanagan (ed.) Ordnance Survey letters Galway: letters relating to the antiquities of the County of Galway containing information collected during the progress of the Ordnance Survey in 1838 and 1839 (Vol. II, 1928), p. 15.