You are here: Home>Archaeology>Alleendarra clearance cairn 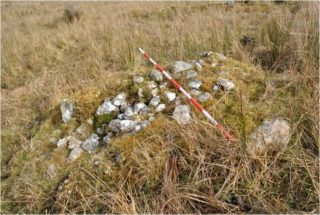 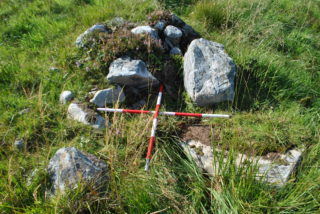 Clearance cairns are a common feature found in the linear field systems of the Slieve Aughty uplands. They comprise of loose conical heaps of stone cleared during cultivation of tillage fields. They are associated with the clachan settlements or farm villages of the rundale system and with single farm dispersed settlement. They can be found in the centre of the field system or to one side. Sometimes they are formed on top of an outcrop thus not wasting precious tillage ground. Cultivation ridges are also part of this landscape. In some instances, especially where the rundale system is evident, low boulder walls delineate individual fields. Single upright stones can also be found subdividing fields or tillage plots. This feature of subdivision and fragmented field systems was a feature of the rundale system where subdivision of plots among family members occurred. This was one of the weaknesses of the rundale system. Where individual dispersed settlement is concerned fields are laid out in what are described by some as ladder farms. These are generally divided by well built drystone walls providing enclosure of individual fields as opposed to the simpler demarcation of plots by boulder walls under the rundale system. Clearance cairns are to be seen throughout the uplands where cultivation has occurred. These enigmatic monuments can generally be dated to the 18th and 19th century. They should be plotted and mapped if we are to achieve a thorough understanding of settlement and agriculture patterns in these upland landscapes.