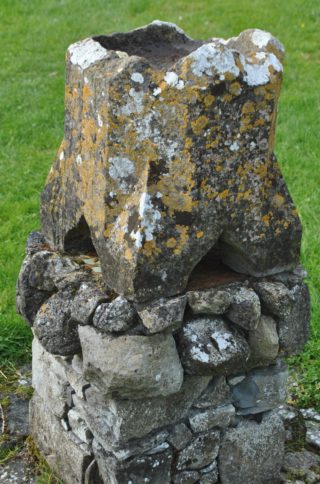 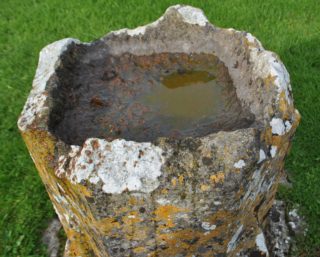 The Lickmolassy font consists of an upright late medieval freestanding font of probable fifteenth-century date. It has in more recent times been placed on a crudely built stone base and is preserved as a feature in Lickmolassy (also known as Churchill) graveyard. Liskmolassy was the medieval parish church for what is now the modern parish of Portumna. The way in which the base is carved is of interest. It has a series of four ogee headed openings at the base that resemble those found on some holy water stoups. The ogee-head is a feature that is also found on the Kilcarne and Rathmore fonts from Co. Meath (Roe 1968, 60, 97). Though its function on those fonts is as an ornamental frame for panels of figurative sculpture rather than simply framing an opening. The Lickmolassy font has an egg-shaped underbelly similar in form to the hoods of some medieval stoups, suggesting that perhaps a four-oped holy water stoup was incorporated into the lower section of the vessel.