You are here: Home>Archaeology>Clontuskert font 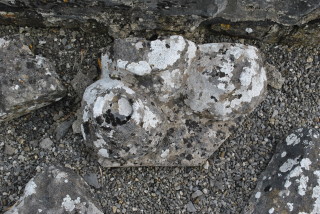 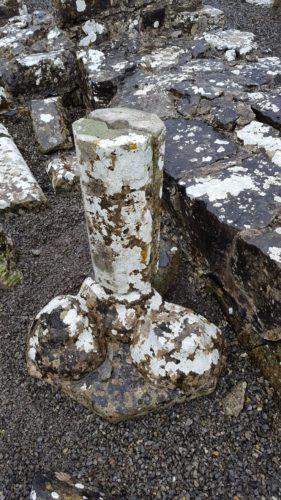 What survives of a composite baptismal font at Clontuskert Abbey Co. Galway consists of a section of one half of a two-part octagonal font base. Moulded pillar bases with sockets to support columns shows that the font bowl was supported at four of its eight corners. A half-section of the drain hole can be identified in a fifth hollowed column at the centre of the base. The central column survives as a number of loose fragments. One short section of one of the four legs also survives. It makes sense to assume that the bowl was also octagonal in shape, though the overall form of the bowl is uncertain. This piece of the font is preserved with an assortment of architectural fragments and other carved stones on the floor of the west claustral building. It is of importance as it adds to the number of known fonts from Clonfert Diocese, but more importantly illustrates that the Canons Regular who were priests, undertook the cure of souls here in their house at Clontuskert. Thanks to David Broderick for recognizing the other fragments.