You are here: Home>Archaeology>Inverted head in Portumna Priory 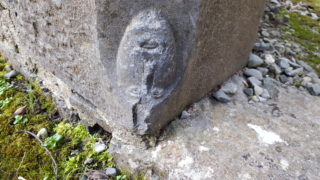 This medieval head is carved in relief on the stop or label of the left jamb of a Gothic doorway leading to the sacristy of Portumna Dominican priory. While we are unsure as to who it may represent – there is one hint – the building is dedicated to Sts Peter and Paul – though some authorities say Peter Martyr. The first St Peter was crucified in an upside down position so perhaps this is him!! It is a fine piece of medieval sculpture typical of the type found throughout Clonfert Diocese. The name of a mason is recorded on the traceried window in the south transept or Lady Chapel dedicated to St Mary. The name Johannes appears in a shortened form in a few places. This name also occurs on the rood screen at Clontuskert Augustinian Abbey. The facial expression and general style oppof the carved ornament in the diocese all appear to be by the one school of sculptors probaby working under the master mason Johannes. However, local folk tradition affords this little carved character a different history. He is regarded as evil and as people pass they spit on him. A strange but interesting practice.