You are here: Home>Archaeology>Clonfert house shrine. 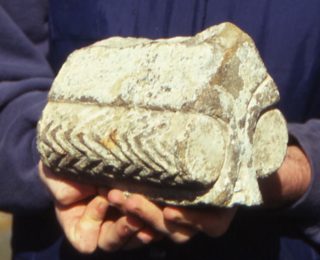 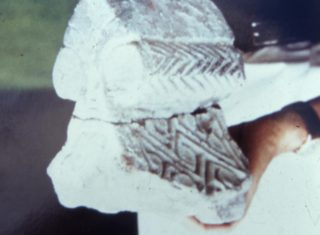 Missing section with Greek key pattern design. Disappeared from Clonfert Cathedral in the 1980s. A copy of this image was given to me by the late Professor Etienne Rynne in 1991.
Christy Cunniffe

Clonfert as a saintly cult centre once possessed a high-status Romanesque house-shrine that may have held the relics of Cummian Fada and Moineann. All that survives today of that once very ornate and prestigious object is a single decorated fragment. A second stone from this structure was lost, probably stolen in the 1980s, when many other small portable objects disappeared from sites in the Midlands and along the River Shannon. Fortunately, there is a single photograph of the two pieces assembled together.  What survives consists of a single decorative Romanesque-style ridge stone. Its general shape and ornate scheme of ornamentation suggests that the Clonfert shrine was a significant and high-status shrine. As noted above, the chronicle entry (AFM 1162) recounts that the bones of Moineann and Cummian Fada were taken from the soil by the clergy of Brénainn and placed in a shrine. The shrine discussed here is very likely to be the one erected in 1162. It is one of a number of elaborate stone shrines erected in twelfth-century Ireland. Two other large stone shrines in Romanesque style survive − one at Clones, Co. Monaghan and the other at Banagher, Co. Derry, and they have been discussed by Peter Harbison (1991, 155).