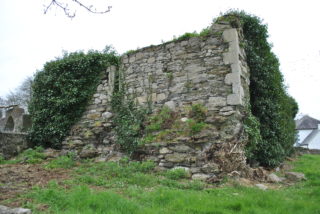 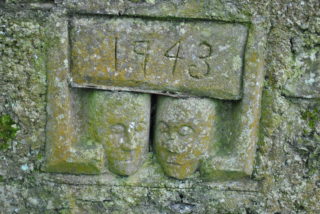 Pair of ornamental stops re set into the graveyard wall.
Christy Cunniffe

All that remains of Leitrim medieval parish church today is the ruined east gable and heavily ivy burdened north wall of the structure. However, what can be seen tells us a lot about the building. First of all the East Window, now missing its head, is of a single-light lancet form typical of the type used in late twelfth and thirteenth-century. The surviving ashlar quoins stones on the corners of the east gable are of a similar date and bear diagonal tooling typical of the period. The other tell-tale sign is the external tapered batter at the base of the surviving walls. This is common to churches from this period. Nothing more survives in-situ. There are no medieval graveslabs, nor evidence of an altar, baptismal font, or holy water stoup, all features that one could expect to find associated with a parish church. However, an examination of the graveyard wall shows clear evidence of a later intervention to the fabric. One upper section from an ogee-headed window shows that a window had been inserted or replaced in the late medieval period. Enlargement and modifications to churches is typically a fifteenth-century phenomena in this region. Other masonry fragments show how stone has migrated from the church and should alert us to why we should examine the surrounding walls and buildings for clues. Of particular interest is the setting into the external face of the graveyard wall of a pair of carved heads just east of the church in 1943. These date from the thirteenth century and either came from the East Window or the main doorway to the church. They originally functioned as a pair of decorative labels or stops providing a rich ornamental scheme. They may also have held a religiously symbolic meaning.

Leitrim Castle or towerhouse lies immediately south west, just outside the church grounds. It is likely that a small medieval settlement occurred here in the past. A bullaun stone is to be seen further to the south west in the adjacent fields and evidence of mills in the hinterland also occurs. Part of a millstone is incorporated into a field wall in the area where  the bullaun stone is found.