You are here: Home>Archaeology>Kilmalinogue mural plaque 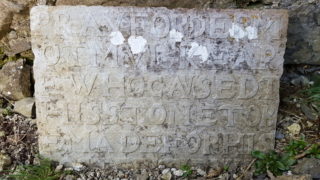 The inscription, the bottom of which is buried in the floor reads: PRAY FOR DERM / OT MVLKEAR / E WHO CAVSED T / HIS STONE TO B / MADE FOR HIS / POSTERITY. The rest is buried.

According to John O’Donovan the Mulcares changed their name to Keary. This plaque is lying against the east wall of the chancel area of the church but was obviously mounted on a wall. It is similar in  the style and general form of the lettering to those found in the medieval religious houses of Clonfert Diocese – where they are very common. It may have initially been framed. The date is not evident but may be hidden in the ground as the plaque is slightly embedded in the floor. It is of a general late seventeenth- or early eighteenth-century style.

Kilmalinogue medieval parish equates to the modern parish of Boula which lies between the parishes of Portumna and Tiranascragh. It was once associated with the O’Maddens of Derryhivney. The church is  of a thirteenth-century date based on its architectural style.