Paved ford in the townland of Loughtorick South 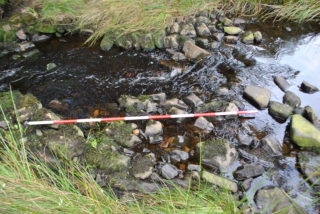 The Slieve Aughty uplands contains numerous rivers and fast flowing streams. Fords and stepping stones were used to provide access over these smaller rivers and streams. Bridges were more expensive and were generally built by government bodies or individual landlords, while these simpler vernacular type communications systems were constructed by the inhabitants of the mountain themselves. This ford is well constructed and when in its original condition comprised of a paved surface using well laid stones that were capable of providing a means of access for carts and traps. The passing of time and the pressure of winter floods have caused some damage to the feature but is is still quite recognizable.