You are here: Home>Archaeology>Graveslabs>Tobarpadraig Holy Well 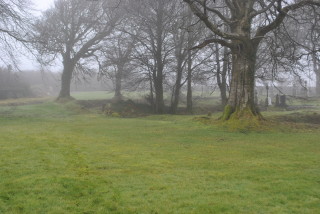 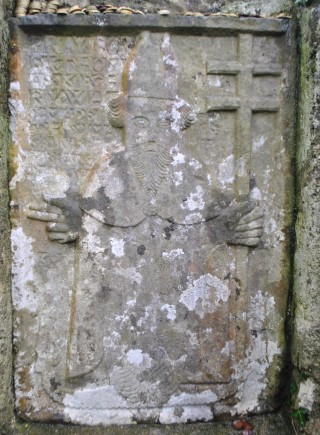 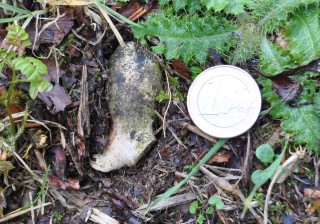 17th-century pipe bowl with €1 coin as a scale.
Christy Cunniffe 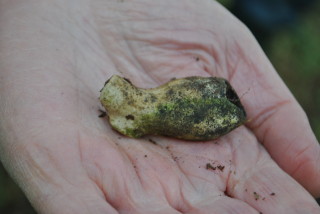 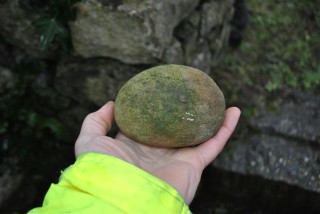 Probable prayer stone
Christy Cunniffe
At Tobar Padraig holy well, Ryehill near Monivea with the local graveyard group on Friday 12/2/2016. The fog/mist was heavy but we had a great day discussing plans for Heritage Week 2016. While there we discovered the bowl of a seventeenth-century clay pipe and a number of quartz pebbles lying on the ground around the well.
There is a wonderful seventeenth-century effigial mural plaque mounted on the internal wall of the well, which bears an image in low relief of St Patrick holding a patriarchal cross/staff in his left hand while he gives the episcopal blessing with his right. He stands on a dragonesque beast or serpent while resting the staff on the tail of the beast. A pair of fangs are shown issuing from the serpent’s mouth. An inscription reads: ‘Pray for Fa Thomas Keary who made this image in remeberance – 1688’. The discovery of the pipe bowl suggests that this pipe was either lost or deposited here at a time contemporary with the dedication of the mural plaque.
The well comprises of a square stone enclosure with a series of steps down to the sacred waters. This is in turn enclosed within a well defined circular earthen bank.
Faction fights took place here in the past. A mound or cairn of stones in the field adjacent to the graveyard marks the supposed site of where a man was killed during one of these fights. A date in August is proffered for the pattern thus suggesting a Lughnasa site.
A fist sized round water rolled pebble preserved in the wall surrounding the well may have functioned as a prayer stone. The presence of quartz is significant as it is found at many holy wells in Co. Galway. In many instance it is noted that it is found in low spreads suggesting flattened penitential cairns or stations. There are a few spots at this well where such spreads appear suggesting the presence of former pilgrim stations.
Tags
beast (1)
clay pipe (2)
dragon (1)
faction fight (1)
Graveyard (18)
Holy Well (13)
Lughnasa (1)
Mural plaque (10)
pattern (2)
pebble (1)
prayer stone (2)
serpent (1)
St Patrick (3)
Tobarpadriag (1)