You are here: Home>Archaeology>Graveslabs>Blacksmith's headstone Grange 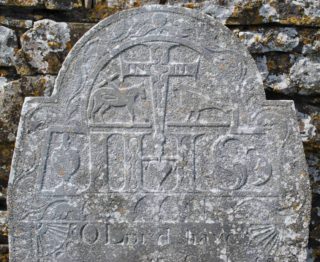 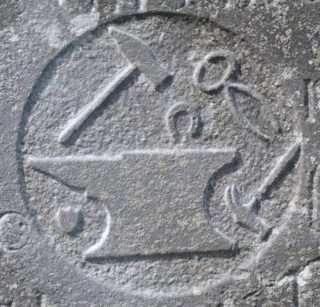 The study of funerary art is both an interesting and very fulfilling pastime once you learn to unravel  the sometimes obscure meaning behind the various symbols and motifs used. Interpreting these symbols is not quite as difficult as it appears at first. The following paper is an example of what can be deduced from a headstone with a little bit of practical detective work.

This elaborately decorated headstone in Grange graveyard near New Inn, Co. Galway, carries a rich array of religious and secular symbols.  Additional to that are the floral devices used as ornament around the sides and upper edge of the headstone. A winged cherub or angel is shown in the upper part of the tympanum. The main scene in the top panel of the stone depicts the cross rising from the crossbar of H of the IHS monogram. The cross is flanked on the left by an ass and on the right by a dove. The ass in this scene supports a plain cross set at an angle across its back, and has a further pair of motifs consisting of an incised coffin on its right side, and an incised heart above its front right shoulder. It is generally a lamb signifying the Agnus Dei or Lamb of God  that is depicted with a cross borne at an angle in this fashion. However, from the length of the tail, the profile of the legs and the shape of the ears, it is clearly an ass that is represented in this depiction. The ass is encountered in several instances in the bible. We meet with it at the Nativity, where along with the cow, it shares the shelter of its stable with the new born infant Jesus and Mary his mother and St Joseph. In that particular context the animals are generally shown in the act of breathing warmth onto the body of the baby Jesus lying in the manger. We hear of the ass again in the story of the Flight into Egypt when St Joseph was warned by an angel and told  ‘to arise and take Mary and the Child and to flee into Egypt’ to avoid the wrath of King Herod who having heard about the new born King of the Jews from the three Magi, ordered that all male infants under the age of two in the vicinity of Jerusalem were to be slaughtered – this act is known to Christians as the ‘Massacre’ or ‘Slaughter of the Innocents’.  And for our story here, the ass figures in the account of Jesus’  triumphal entry into Jerusalem on Palm Sunday on the back of an ass in which we are told that palms were laid in front of him by the waiting throngs – this act occurred a week before Easter Sunday. In this instance what we appear to be seeing on the Navin headstone is the ass bearing the cross as a symbol of Christ. The coffin is one of a number of symbols associated with mortality and in this context should be probably understood as a foretelling of the impending death of Christ. The small heart carved on the side of the ass, is one of four depicted on this headstone. A large one is located beneath the cross bar of the H, flanked by two much smaller examples. The heart on its own is generally used as a symbol of fidelity. On the other side of the cross a dove holds an olive branch in its mouth. In the Old Testament story of the Great Deluge (Genesis 8:11), Noah sent out a raven to see if the flood waters were abating, but the raven failed to return. Following on from that, Noah then sent a dove, the dove after its second attempt returned with a piece of an olive branch in its beak, signifying that the flood levels were dropping. The dove holding an olive branch is in this context an allegory for the Christian soul being saved from sin, and is thus a symbol of resurrection. It is in a more general context taken as a sign of peace. The IHS is flanked on the left by a classical urn which can perhaps also be seen as an elaborate monstrance and a moon or lun on the right. The moon generally shown in association with the sun or sol  is one of the forty or so passion symbols commonly depicted at the crucifixion of Christ. An urn or monstrance has replaced the sun in this instance.

A circular panel on the bottom of the headstone bears a collection of implements and tools associated with the trade of farrier or blacksmith, making a direct reference to the occupation of James Navin. This set of six occupational symbols, consists of an anvil, sledge-hammer, claw hammer, pincers, horse shoe and in the bottom left under the horn of the anvil an ox shoe. The ox shoe is the least common device. The farrier or smith was often called upon to make a special shoe with a solid sole for a cow or ox with a split hoof.

Vocational or occupational symbols are often regarded as a type of poor man’s heraldry. They are semi-heraldic in that they are used as a device to portray the status of the deceased and function a visual identity of their former profession or trade. However, they hold no official imprimatur and should not be confused with official heraldry, the use of which in this country is controlled by the Office of the Chief Herald of Ireland since 1937 and originally the remit of the Office of the Ulster King of Arms founded by Edward VII  in 1552. In the great majority of cases, vocational symbols are allocated a secondary position on graveyard memorials. Conceding primacy to the suite of religious motifs at the top of the stone, they are usually located at the bottom of the stone, or at least below the religious symbols. Where official heraldic devices are used it is common for the coat of arms and crest  to take central place at the top of the monument with any additional religious content kept to a minimum if used at all.

Nevin or Navin appears to be a quite common blacksmith name in the East Galway. As well as the headstone discussed above there is a further Nevin headstone bearing a set of blacksmith symbols in Clonfert graveyard. This family of smiths had a forge in Esker (near Banagher) in the Civil Parish of Clonfert. One of them later moved to Tirnanscragh where he continued to work as a blacksmith for a local landlord. A blacksmith by the name of James Nevin is recorded in the 1821 census for the townland of Glanaskey in Kilreekil Parish. Another blacksmith, this time named William Nevin is noted in Slater’s Directory of Ireland as operating in Barrack Street, Loughrea in 1846. A later edition of the same directory records a blacksmith of the same name (either him or perhaps his son) as still working in Barrack Street in 1881. Even from this very brief survey it is apparent that there is a tradition of blacksmithing among certain members of the extended Nevin family. In order to determine just how widespread  this link with blacksmithing was, and to establish if in fact that the Nevins were hereditary smiths, requires further research.