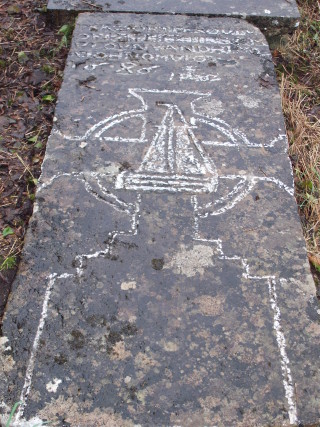 This elaborately decorated seventeenth-century graveslab is located in Moycullen medieval graveyard. It bears an image of a ship emblazoned on an elaborate ringed cross with a stepped Calvary base. The cross terminals are expanded in serif form. The inscription carved in relief reads: Pray for the soul of  …  1686. It is one of two similar examples preserved in this graveyard. A small IHS monogram with a cross typical of the seventeenth century is located above the cross head.