You are here: Home>Archaeology>Graveslabs>O'Madden plaque 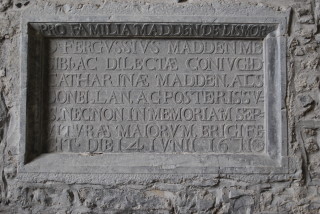 Wall mounted or mural plaques of this type are a very common feature in the vast majority of religious houses and some medieval parish churches in Co. Galway. They can be framed as this example, can consist of simple unframed plaques. This example is carved in relief – in other words it has raised lettering. It is dedicated to Fergus and Catherine Madden of Lismore in Meelick Parish and dates to 1671. It is preserved on the east end of the south wall of Meeelick Franciscan friary. The O’ Maddens are credited with founding this abbey in the early fifteenth century, c. 1414. Meelick has one of the largest collection of mural plaques of any church in East Galway showing the level of high status burial that took place here during the 17th and early 18th centuries. However, unlike in other churches in the region no plaques bearing Coats of Arms occur within the building.