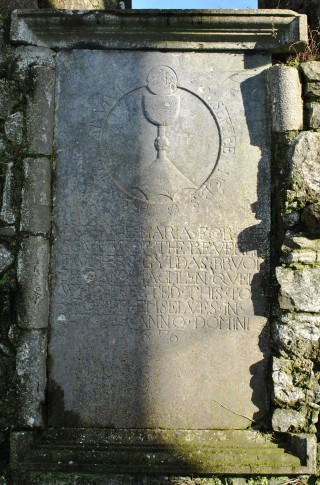 This rectangular graveslab of seventeenth-century date is located in Claregalway Franciscan abbey. It bears an image of a Galway type chalice with hexagonal foot and a decorated bowl and expanded knop on the stem. An inscription around the chalice reads: CHRISTUS FILI DEI VIVI MISERERE NOBIS. Translated to English this means Christ, Son of the living God, have mercy on us. The chalice is surmounted by a host which bears a Sacred IHS monogram a cross with serif style terminals. There are three nails or arrows beneath the cross-bar of the H.