You are here: Home>Archaeology>Graveslabs>Kilcorban Graveyard

Between Portumna and Tynagh. 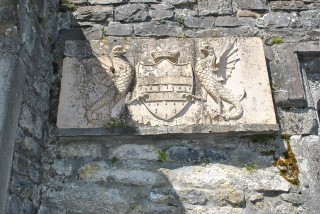 A Coade stone mural plaque erected to the Nugent family in Kilcorban graveyard between Portumna and Tynagh. The Nugent’s were a transplanted Catholic family who were given property on the Clanrickarde estate at Pallas in Tynagh parish during the Cromwellian period. The mythical bird portrayed on their coat of arms is a cockatrice. The Nugent’s a Westmeath family resided originally in Pallas Castle and later erected a grand house there known as Pallas House. It was torn down in the early 20th century. Branches of the family also lived at Crannagh, Spring Garden and Flowerhill.
For more information on this or any estate in Galway visit the Landed Estates database at http://landedestates.nuigalway.ie