Discovered at Clonfert in the 1980s 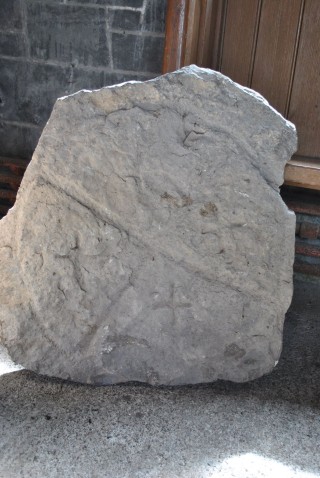 This limestone slab of Early Christian date, discovered at Clonfert in the 1980s, bears a large cross within a circle, with four smaller crosses in each of its quadrants. It is hard to classify. It may be a medieval cross slab or an altar stone. It is very crudely executed and bears no inscription. The traces of punch work are evident in the lines of the cross and circle. The outer circle was also poorly laid out as it touches the edge of the slab at one point causing a slightly straight section on the arc.  The use of five crosses may represent the Five Wounds of Christ often found on altar stones. The mandatory relics were placed in the crosses. This slab was recovered during graveyard maintenance by three local men, Michael Galvin, Seamus Hynes (RIP) and Owen Kearns (RIP).