You are here: Home>Archaeology>Graveslabs>Cloinne Domhnaill

Arms of the O' Donnell's 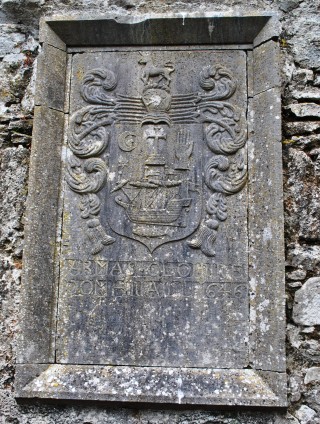 This mural plaque is mounted in a side chapel in Ross Errilly Franciscan friary. It bears the coat of arms of the O’Donnell clan consisting of a Calvary cross, with a waning crescent moon on its dexter side and a right hand on its sinister side above a galleon and salmon. The crest is a unicorn. An incised motto reads: HIS Vinces, a shortened version of ‘In Hoc Signo Vinces’, meaning ‘In this Sign you Conquer’. The IHS is incorrectly rendered as HIS.

The inscription beneath the shield reads: ARMAS CLOINNE DOMHNAILL 1646