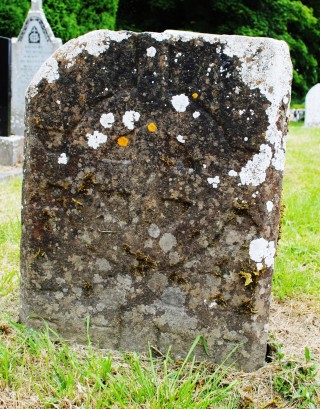 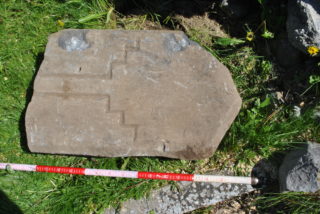 This graveslab is situated in Killeenadeema graveyard close to the remains of the surviving wall of the former medieval parish church. It comprises of a thick limestone slab with a large ringed cross and two smaller equal armed crosses in the lower quadrants. The main cross has serif style terminals and is carved in false relief. The inscription if any is buried. A chamfer occurs on the left side of the slab while the right seems to have been modified. This slab likely functioned as a recumbent slab when originally commissioned and was later reused as an upright stone in its present position. It is an important cultural monument that provides useful information on the status of the native Church in Clonfert Diocese during the seventeenth century. Since this monument was first recorded a second fragment has appeared after tree felling at the site. This section comprises of the base of the grave-slab. I has a pointed coffin-shaped base now partially damaged. The lower section of the inscribed cross discussed above has a stepped Calvary base. No evidence of an inscription occurs on this section. The sides and end are heavily chamfered.