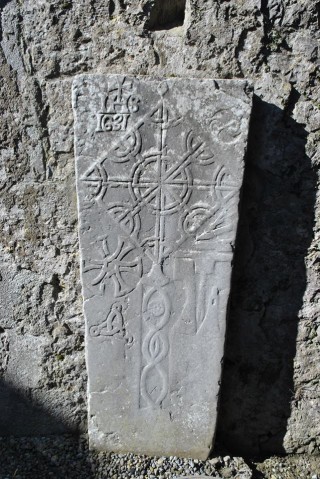 This highly ornate post medieval graveslab dates to c.1631. It bears a typical small 17th-century IHS monogram with a small cross springing from the cross bar of the H. It also exhibits a number of vocational or occupational symbols. This collection of symbols are original to the stone and consist of an axe, adze, auger, chisel, pliers and one other item probably a maul or mallet. The cross head is similar to a flabellum as found on Early Christian slabs, though angular in form instead of disc-shaped. There was revivalism of earlier so-called Celtic motifs at this time. A wheel like device and a triquetra knot can be seen on the left of the cross shaft. Badly eroded traces of what appears to have been a triskele can be seen in the upper right corner of the slab. The shaft consists of a pair of interlaced straps with a host framed within the interlace on the upper part of the shaft. This graveslab is attached to the west wall of the entrance area to the nave. With the amount of wear to parts of the stone it is probable that it was laid on the floor originally.