You are here: Home>Archaeology>Graveslabs>Clonfert Cross Slab 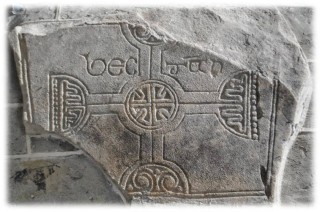 This elaborate cross inscribed slab bears an elaborate Greek cross of the Clonmacnoise type set within a trapezoidal frame and bears elaborate expanded terminals and an expanded central roundel (Higgins 1987a, 338). The workmanship on this slab is very ornate, bearing a pair of pelta motifs of ultimate La Tène style, fretwork pattern, pellets and intricate interlace. It displays an incised inscription in half uncial script commemorating Becgán. Based on the decorative style the slab dates to the ninth or tenth century. Macalister (1949, 150) argues for a tenth-century date on typological grounds. Harbison (1991, 201) does not discuss this particular grave-slab but proposes that a grave-slab with similar expanded terminals and central roundel from Clonmacnoise, dedicated to Tuathail Saer, can be dated to the ninth century. Ó Floinn (1995, 254-5) categorises this type as belonging to Type B and allocates it to the later ninth to tenth century.