You are here: Home>Archaeology>Graveslabs>Addergoole cross slab 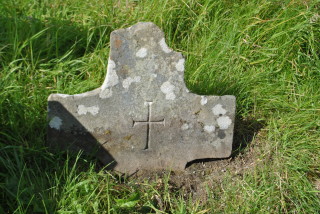 This crude sandstone cross in Carrowntomush graveyard near Dunmore bears a very well defined cross with serif terminals. The style and quality of the incised cross suggests that this is a late cross, perhaps 19th or 20th century. However, it could also be an earlier cross re-used in modern times. Simple vernacular made crosses without telltale inscriptions,can be very hard to date. It is one of a number of sandstone crosses and slabs of vernacular nature in this graveyard. A 12th-century cross, a medieval carved head and a bullaun stone that is believed to have functioned as a holy water font are also to be found here.