You are here: Home>Archaeology>Graveslabs>Clonfert inscribed cross-slab 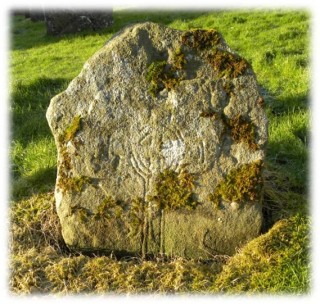 This monument consists of an in situ cross-inscribed slab that stands in the south–eastern corner of Clonfert graveyard. It is of a style which Ó Floinn designates as Type C. In his discussion of the grave-slabs from Clonmacnoise, Ó Floinn (1998, 93) describes Type C as a ringed Latin cross with an expanded central and terminals.[i] The stone itself is an irregularly shaped piece of sandstone conglomerate, 0.61m by 0.63m by 0.12m. This slab originally bore an inscription across the left shoulder and immediately above the cross, which is now illegible due to severe weathering. The inscription has been deciphered by O’Donovan (1839, 40) as ‘Or D’, while Petrie (1878, 51) interprets it as ‘ORDARA’, Crawford (1913, 153) repeats this, while Macalister (1949, 3) reads it as ‘OR DO BACLAT’.[ii] Higgins (1987, 375) correctly proposes that the formula beginning ‘OR DO’ rather than ‘OR DARA’ makes the greater sense because OR DO (a prayer for…) is the more usual form of lettering to occur before a name. This slab bears an outlined Latin ringed cross, with the arms of the cross extending beyond the cross ring. This type of slab Ó Floinn (1995, 255) designates as belonging to Type C. He points to their occurrence on sites ‘in the vicinity of Clonmacnoise’, such as Gallen, Tisaran, and Lemanaghan, Co. Offaly, Inisbofin, Co. Westmeath, and Clonfert, Co. Galway, and he finds that many of these sites had associations with Clonmacnoise. The cross on the Clonfert example consists of a two-lined form, with square terminals to the upper shaft and arms but has a pointed base to the shaft. The use of a point at the base may be inspired by or based on an earlier wooden processional cross, so shaped for its base to slot into a leather carrying pouch worn around the neck of the cross-bearer. A different interpretation is proposed by Richardson (2006, 79) who argues that ‘it is possible that they reflect the treatment of wooden crosses, plunged into a socket or just stuck in the ground’. It is, as Ó Floinn points out, hard to date, but according to Higgins (1987a, 375) can be placed around the end of the tenth century.