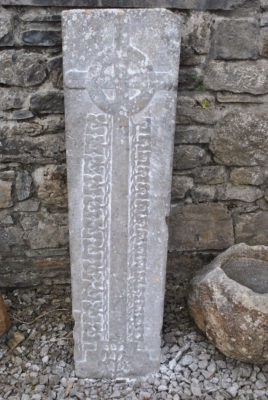 This monument consists of seventeenth-century tapered graveslab in Kilcorban, Third Order Dominican Priory near Tynagh. The ringed headed graveslab has a stepped Calvary base and is decorated on both sides for the full extent of the cross shaft with entwined vine leaf. It is one of a number of  graveslabs in Kilcorban. The vine ornament is similar to that found on slabs in Portumna Dominican priory and also on the bowl of Woodlawn seventeenth-century baptismal font.