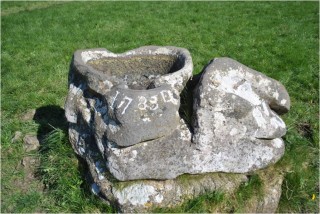 This unusual Penal-era baptismal font is situated in farmland in the townland of Cartron, between Loughrea and Craughwell. It is located immediately over the townland boundary a few fields south of a ruined medieval church GA104-266—- in Seefin townland. It comprises of an irregular shaped limestone boulder formed into a font with a large figure of eight shaped bowl. A small Penal cross with serif terminals, followed by a date 1783 AD shows that it belongs to the late eighteenth century. It is a relic of the time when open Catholic worship was prohibited under the Penal Laws and the Church was removed to the landscape. This is quite a unique type of monument.