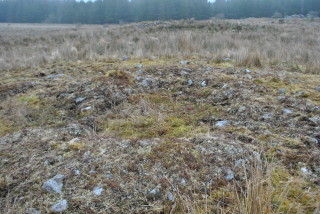 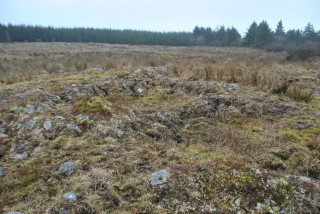 The local placename ‘Gorry’ or garrai, in Loughatorick townland near Woodford provides evidence for the former practice of rundale farming in this townland. The term garrai refers to the gardens surrounding the seanbhaile or clachan settlement. In this instance examination of the site shows evidence of circular hut sites associated with booleying – the seasonal practice of removing cows to the uplands for the summer months. The two huts shown here have a low profile appearance. The base of the walls survive as raised rings of earth and stone covered in a thin layer of grass and moss. These huts are just one of several clusters recorded to date in the Slieve Aughty’s by the Community Archaeologist.