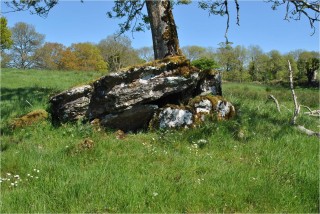 This monument GA125-119— consists of a collapsed portal tomb situated in Marblehill townland in Ballinakill parish. Three orthostats are still to be seen though in a dislodged position. The large capstone has slipped and lies on top of these stone supports. There are a number of other megalithic tombs and other prehistoric monuments in the area supporting the argument that this was a significant region for settlement in prehistoric times.