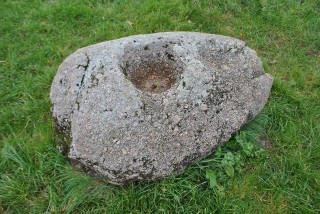 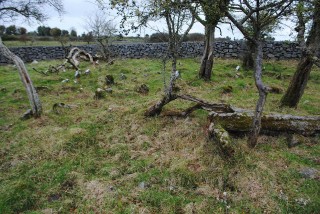 A children’s burial ground, a holy well dedicated to St Patrick and a (double bowl) bullaun stone on Mary Deely’s land in the townland of Caherbroder, Beha, near Gort. This farm has a remarkable collection of archaeological features all cared for with pride by the owner. Two large ringforts, one that gives its name to the townland, the other with a souterrain, and a partially preserved enclosure were visited on the day. The latter feature, the enclosure, was not previously recorded and had been damaged by the building of the nearby railway line in the 19th century.