Bullaun stone at the entrance gates to Ballinakill Catholic church (Leitrim By.). 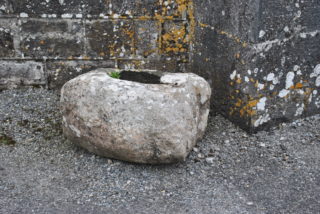 Consists of a single bowl bullaun stone originally located in the field opposite Ballinakill medieval parish church. It was removed to the modern Catholic church entrance and is now used as flower pot. Bullaun stones are a common feature of early Christian sites. They are a form of hand mill functioning it is believed, as simple stone mortars for processing various items and substances. They often take on a secondary function as small holy wells or as stones thought to bear the marks of a particular saints knee. In this way many have become objects used in the practice of popular piety.