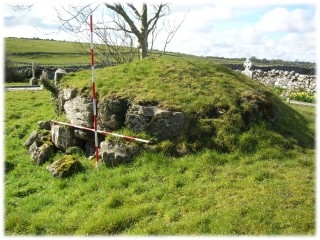 Base of round tower
Christy Cunniffe

Base of a round tower in Kilmeen medieval graveyard near Loughrea. Round towers were tall slender bell towers found at some Early Christian sites. They usually have four windows near the top at the cardinal points and a conical cap. In Irish they are known as ‘Cloigteach’ meaning bell tower. This particular example is not widely known about and is an important addition to the list of ecclesiastical heritage features in Co. Galway.