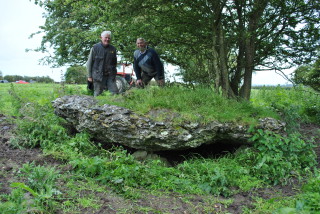 Thais large limestone slab located in farmland in Balydoogan townland Fohenagh is known locally as a Mass Rock. It has  not been previously published. Inspection of the feature shows that it is raised slightly off the ground and rests on a number of smaller stones suggesting that it may in fact have originally functioned as a prehistoric boulder burial.