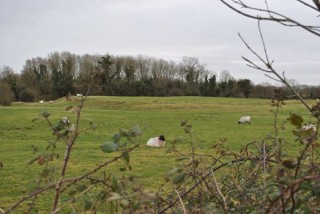 The remains of an Anglo-Norman earthwork castle to the north east of Meelick Friary. Meelick like Portumna was one of the two sites west of the Shannon associated with William De Burgos first foray into Connacht in 1203. He set up early earthworks at both places. There is a mention in the annals of a Motte but this is more like a ringwork with a palisade. It likely contained a wooden castle. A ditch around it would have filled naturally with water and functioned in the same manner as a moated site. There is a folk memory that suggests the motte at Meelick was removed in the late 1920s as part of the Shannon Scheme undertaken to build Ardnacrusha hydro power station. It is uncertain however, if this in fact a reference to the destruction of a 17th century fortification to the east of the abbey.