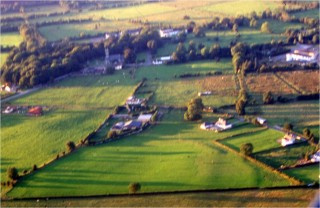 Aerial photograph of the landscape at Clonfert looking north. The cathedral and graveyard is in the middle background. The red barn in the centre left of the photograph marks the site of the former nunnery. The pair of arced banks in the foreground on the right may in fact represent an earlier Iron Age settlement. Analysis undertaken on pollen taken from the bogs at Clonfert by Professor Valerie Hall QUB clearly shows woodland clearance and cereal growing as early as the 3rd century AD. Clonfert monastic settlement was founded in 557 by St Brendan known as Brendan the Navigator. The cathedral originated as a damliac or stone church possibly in the 10th century (burned in 1045). It was elevated to cathedral status in 1111 at the Synod of Rathbreasail. The pedimented Romanesque doorway was added c.1180. The bell tower, chancel arch and inner order of the doorway are all of a 15th-century date. The chancel arch bears ornate Gothic ornament.