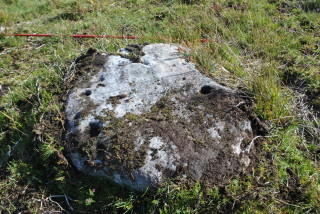 An earthfast sandstone boulder with a series of cup marks was recently noted by the writer on the commonage in the townland Knockauncarragh, Woodford. A number of other prehistoric monuments have been recorded in this townland under the community archaeology initiative and a previously recorded standing stone GA125-074— also occurs here.

Cup marks occur in a number of upland regions in many parts of Ireland, but this is the first example recorded in East Galway. They would have been originally thought to date to the extensively to the Bronze Age but are a now given a date of c.4,000BC-3,400BC placing in them in the early Neolithic Period.

One of two stones forming a recently noted Stone Pair close to this monument also bears a shallow cup mark, and one other natural depression, which if worked further could also be one. It is possible that stones bearing natural geological insertions such as quartz pebbles were sought out and these natural cups were then enhanced by man.

For an up to date and succinct account of cup marks, their function and distribution in Leinster read: Corlett, C. 2014 “Inscribing the Landscape : The Rock Art of South Leinster”. Wordwell, Bray.

I was accompanied by Frank Scott on this field survey.