You are here: Home>Archaeology>Churches>Ohilbeg Chalice 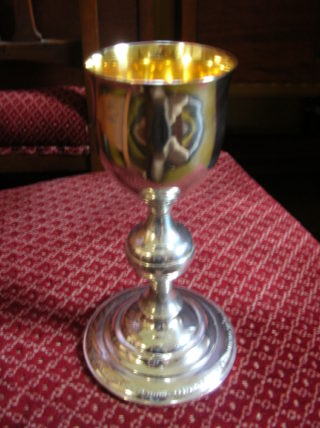 This silver gilt chalice is preserved in Lawrencetown Church. It has a tulip shaped bowl with an expanded knop on the stem. It has a round base and bears an inscription around the foot. The chalice dates to the early eighteenth century. Known as Ohilbeg chalice it came from Ohilbeg Chapel now no longer extant. Ohilbeg Chapel is not marked on the OS, maps but was likely to have been on or near the site of the old medieval convent of the Arroasian Canonesses, a daughter house of  St Mary’s in Clonfert. This chalice is still in liturgical use.