You are here: Home>Archaeology>Churches>Clontuskert Abbey 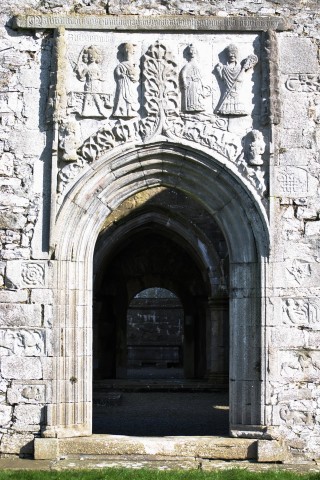 Clontuskert Abbey was founded in the 12th century by the Canons regular of St Augustine. It has undergone a number of periods of change. Its most significant feature is its highly elaborate 15th-century carved doorway. It also has a richly decorated holy water stoup of a similar date. It was restored in the 1980’s. The east window had collapsed and was reconstructed with only a few new fragments of masonry required. The rood screen bearing the name Johannes was reconstructed from excavated fragments.

An account of its restoration and archaeological excavation can be read in: Fanning, T. 1976 ‘Excavations at Clontuskert Priory, Co. Galway’.  Proceedings of the Royal Irish Academy, Volume  76, Section C, Number 5.

The iconography of the doorway comprises of the weighing of souls by St Michael, St Catherine of Alexandria bearing her typical saintly attributes, the millwheel and sword, both references to her martyrdom. St John the Baptist is shown wearing a camel skin, while a bishop is also depicted. This bishop is likely to be  Matthew McCraith, the bishop of Clonfert at the time the door was constructed. Other symbols including a mermaid swimming with fish, a pelican in piety, a pair of mythical yales and a pair of beasts, probably a griffin and lion. A plethora of other symbols are depicted.