You are here: Home>Archaeology>Churches>Loughrea Abbey 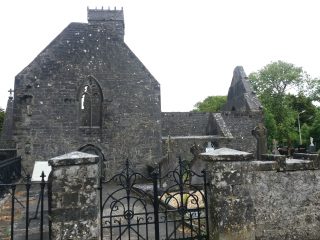 St Mary’s Abbey in Loughrea was built c.1300 for the Carmelite order by Richard de Burgo, 2nd Earl of Ulster. It is located outside of the medieval town moat as was common for mendicant friaries. As many of these buildings also functioned as hospitals any possibility of disease was kept outside the town precincts. The transepts and bell tower are of late medieval date as is the west doorway and traceried east window. According to common tradition St Ruth the French general at the Battle of Aughrim was buried here. A number of interesting vocational or occupational symbols are to be seen in the surrounding graveyard.