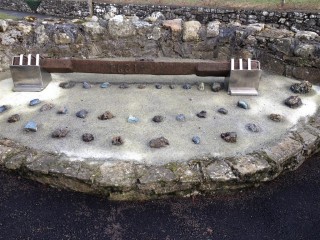 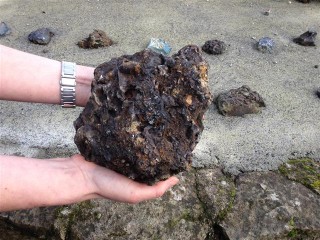 Large piece of slag/bloom with traces of iron and some unburnt charcoal.
Christy Cunniffe 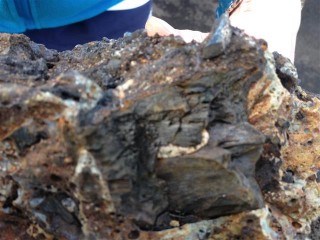 Fragments of unburnt charcoal embedded in the slag
Christy Cunniffe

An iron bar displayed at the Heritage Centre in Woodford originally functioned as a lintel of a blast furnace. It is dated 1681 so likely provides the start up date for the iron works here in Woodford. It is an important element of the former industry that took place in and around Woodford from the seventeenth century on. Pieces of iron slag and bloom from the local blast furnaces are also on display. The memory of the iron industry is preserved in the local place names around Woodford. For example places such as Upper Forge, the Bay, Bark Hill are all associated with the iron mills and related industries such as tanning. The preparation of bark for use in the tanning industry is likely to have been a by-product of charcoal production, so necessary as fuel for the blast furnaces.