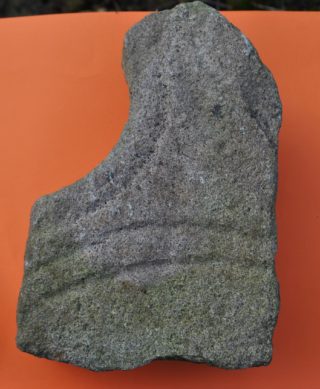 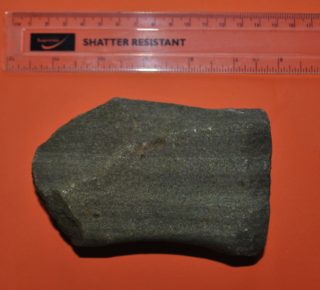 Section of the upper stone of a medieval rotary disc quern. This piece bears the outline of an inscribed cross of arcs and also exhibits the inscribed circular ring around the central hole. It was discovered by Seamus Cloonan in a ringfort/cashel GA 0960037—- on his farm in the townland of Caherfurvaus near the village of Craughwell. A small smooth sandstone hone was also found in the same place. The surviving section of the quern measures c. 8.0cm by 4.5cm overall. It is estimated from the  size of the surviving arc that the central hole measured c. 4.5cm diamater. This piece is now in the hands of the Community Archaeologist for depositing with the National Museum of Ireland (NMI) at the request of the finder. When fully intact it is proposed that the decoration comprised of an inscribed circular band around the outer edge of the stone, a circular band around the central hole and an ornate cross made up of four double lined arcs. It would also have had a hole for fixing the wooden handle used to rotate the disc. This is not evident in the surviving section but is likely to have also been enclosed by an inscribed ring. The hone is made from a small piece of sandstone and exhibits extensive wear to two of its sides where it  was used to sharpen or polish objects in the past. Recorded on 13/03/2017.