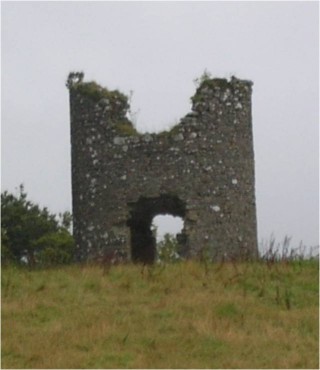 The remains of a typical drum type windmill has survived at Newtown Eyre, Kiltormer. Windmills have been in use in Ireland since the medieval period but the majority encountered in the countryside today are of eighteenth- and nineteenth-century date. The purpose of opposing doors is to allow the miller to exit the building safely. The roof caps of many mills were designed to rotate automatically so as to take advantage of the wind. Before exiting the building the miller would always check through a slit above the door to see if the sails had shifted and were rotating outside of the door. If they were he then used the alternative exit.

Early windmills were known as post mills and were as the name implies supported on a stout oak post set into the ground. In these mills the mill housing rotated around the central post. The later stone drum mills were stationery and it was the roof to which the sails were attached that rotated.

Even where windmills have disappeared completely from the landscape local place-names such as mill-hill, mill-mount, mill field are important indicators of the former presence of a windmill. It is also worth noting that many windmills are marked on the various nineteenth century maps produced by the Ordnance Survey of Ireland. These can be easily accessed at www.osi.ie