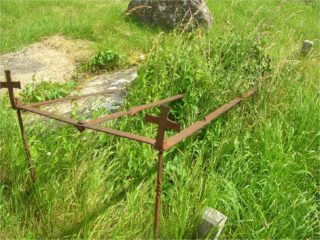 Consists of one of a pair of blacksmith made wrought iron frames protecting graves in Ahascragh old graveyard. Protective frames built over graves are referred to as mort-safes. They were specially commissioned to protect newly buried bodies from been stolen by the dreaded grave robbers or body snatchers who supplied bodies for medical research. Mort safes are a common feature of British and Scottish graveyards where some very elaborate examples occur. These examples in Ahascragh are quite vernacular in nature and in reality are more aspirational than functional in their design.