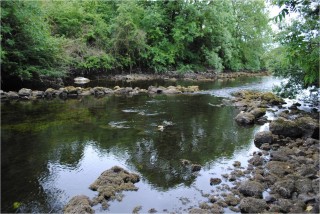 A set of stone v-shaped fish traps survive in the river bed to the rear of the Franciscan friary in Meelick. This stretch of water was left undisturbed during the 19th-century drainage scheme undertaken by the Shannon Commissioners. The traps consist of stone built traps placed along the route of the fish swim. A large area of river below the weir linking Galway and Offaly has surviving fish traps and is a very important piece of riverine archaeology. The Franciscans held rights to trap the eels at Meelick and as late as the 20th century the same traps/weirs were used by local fishermen. During the summer of 2010 the water levels dropped exposing the traps, providing a unique opportunity to photograph these features.