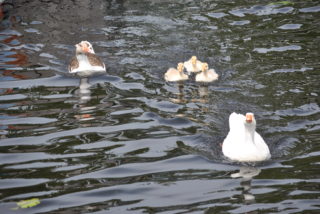 In the early and mid twentieth century nearly every farmer kept flocks of geese. A little discussed aspect of goose husbandry undertaken by the people of Clonfert during the 1960s when I was a boy, is the releasing of flocks of geese on the River Shannon. The purpose was to allow the geese feed freely for the summer on the river without any great cost to their owners. Once the goslings were mature enough (early summer), farmers would load their flocks into horses carts (with the creels covered with old jute bags to stop the birds escaping) and take them to the river and release them to live wild for the summer months. This was something that occurred naturally when people lived by the river. They only returned to collect them again a little while before Christmas when the winter floods began to appear. At this stage they would take the geese home and feed the rather skinny birds with corn and pollard to ‘fatten them up’ for the winter market. When the geese were brought home they would be thin breasted leading to a local expression to describe a young fellow with a narrow chest as having “a breast on him like a callow goose”. This form of poultry husbandry was carried out by families who themselves were re settled on the East Galway uplands following the break up of the large landlords estates.