You are here: Home>Uncategorized>Bog Butter 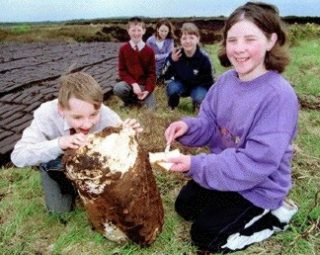 A wooden cylinder of bog butter was discovered in 1999 in Poll na gCapaill bog near Barnaderg in Co. Galway by turf cutters Tom Burke and Vincent Roche. Bog butter is a common archaeological find that often lies unreported. There are a number of theories about the placement of barrels of butter in bogs. One is that it was placed there in the acid soils for preservation in a time when there were no fridges or other ways of preserving butter for later consumption. The other is that it was in fact deposited ritually as a form of devotional offering to the gods as an act of ensuring fertility of the land and its produce in the ensuing year. Either way, finds such as this should be reported to the National Museum within 96 hours. An archaeologist from the museum will arrange with you to visit the site and will decide what should be done. The best way to preserve any organic find such as bog butter or in fact a bog body is to cover it again immediately with a layer of wet peat in order to stop it from drying out and report it as quick as possible to the museum staff. The main reception telephone number for the National Museum is +353 1 6777444 or ring the Galway Community Archaeologist, Bernie Doherty at 086 1003888 and she will contact the museum for you.