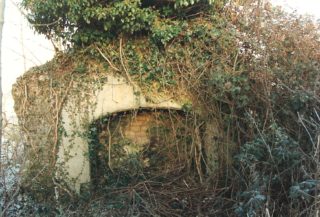 The most important aspect of the vernacular house was its fireplace. Nearly everything that occurred in the house revolved around the hearth. The fireplace provided a source of heat, light, and a means of cooking and also functioned as the nucleus for those rambling to chat and generally meet. The chimney and fireplace came in different forms. Some comprised of well built stone chimneys with extensive chimney breasts where people could sit. Others comprised of rod chimneys – chimneys made form a wooden frame of wicker plastered in earthen daub. These are supported on a large cross beam known as bressemer in some places. As the fire was set on the hearth there was no real fear of the wooden structure catching fire. Aditional to the hearth was the set of cast iron utensils used to cook and bake. A crane, kettle, three-legged pot and sets of pot hooks and the griddle are all features of the country hearth.