You are here: Home>Archaeology>Crosses>Leacht Oliver Browne 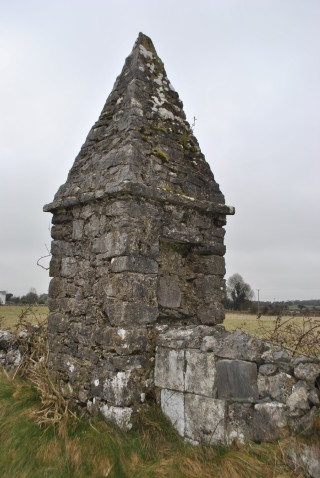 A limestone leacht cuimhne (memorial leacht) or wayside cenotaph located at Cartymore Cross near Athenry was erected to Oliver Browne. It is one of a handful of such leacht’s in Co. Galway. A recess in one face is evidence of a missing plaque. It is noted as Laghta Oliver Brown on the relevant Ordnance Survey 6-inch scale map (sheet 71 for Co. Galway) and in the associated field books we are told that Oliver Brown died here following a fall from his horse in 1628. Professor Eteinne Rynne in a short paper in ‘The Athenry Journal’ proposed that this seems a bit early as similar monuments in the region are much later in date. He proposes that it may have been an error and should perhaps be read as 1728.