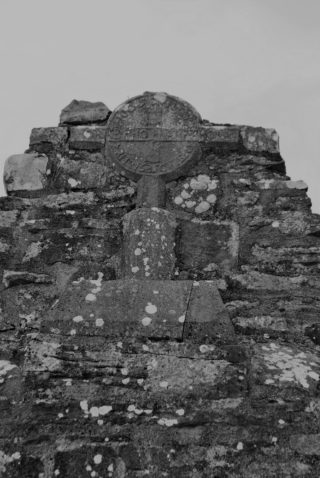 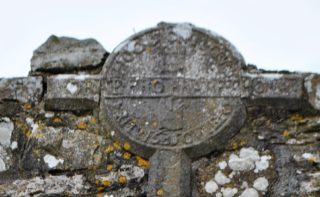 This fragmented cross has been fixed above the entrance gate to Ross Errilly Franciscan friary. It comprise of a base, part of its octagonal shaft and an interesting disc headed cross. It presumably had a collar which is now missing. It likely functioned as graveyard or preaching cross similar to others associated with mendicant houses in East Galway such as Meelick and Kilconnell. it bears an IHs monogram and a small cross in the upper part of the panel and the three nails of the Crucifixion in the lower section. The inscription reads: HOC * SIGNVM * CRUCIS ERIT * 1635 CVIER. ORATE * PRO FRATERE * THOMA. Obviously as can be gleaned from the inscription this cross was erected for a friar named Thomas.