You are here: Home>Archaeology>Crosses>Ardrahan Cross 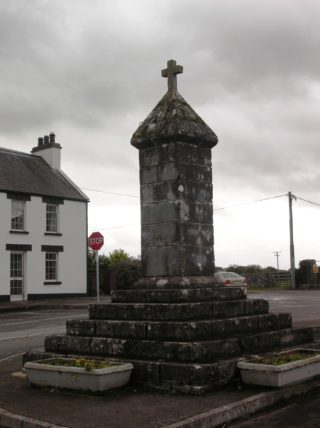 Ardrahan Market cross with a stepped Calvary base.
Christy Cunniffe

This impressive cross stands in the square in the centre of the village of Ardrahan. It consists of a square pillar resting on a stepped Calvary base and is constructed from blocks of limestone with an overhanging pyramidal cap and a simple cross on top. Crosses such as this were used as market crosses where bargains were made and sealed. It seems that it dates to the early eighteenth century but could equally be at home in the seventeenth century. Ardrahan was initially founded as a small Anglo-Norman borough around an earlier Romanesque ornamented church with a round tower in the grounds. The ruins of the medieval castle lies across the road from the church.