You are here: Home>Archaeology>Crosses>Crucifixion scene 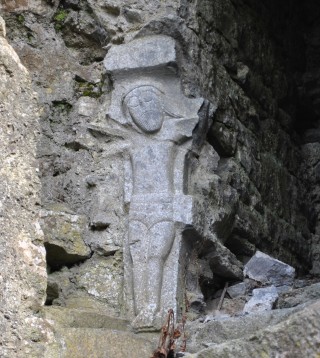 This carved limestone crucifixion scene consists of an effigy of the Crucified Christ on a cross. The cross appears to be set in a niche suggesting that this was part of a larger feature. It is set at height in a secondary position in Ross Errilly Franciscan friary. It may be late medieval in date but is more likely to be of seventeenth-century date. The arms of Christ are broken. His feet are crossed and he is shown with a small pants rather than the standard loin cloth.