You are here: Home>Archaeology>Fonts>Woodlawn Font 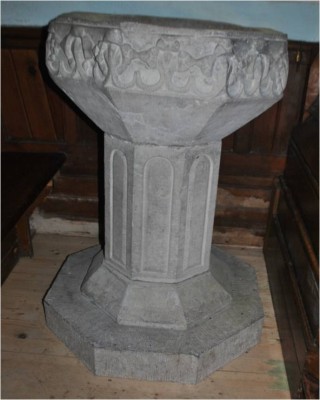 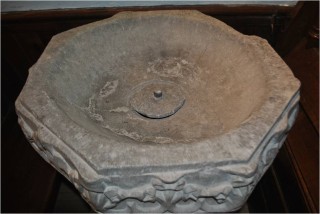 The octagonal shaped Woodlawn font though of a late medieval design is likely to be of a seventeenth-century date. It is one of three decorated fonts surviving in the diocese. The ornament is only applied to the rim of bowl and consists of a wide band of vine leaf consistent with the decoration found on two seventeenth-century tapered graveslabs in Clonfert Diocese, one preserved in Portumna Dominican priory and the other in Kilcorban Third Order Dominican priory. Interestingly, a single scallop shell is incorporated into the vine-leaf design. While scallop shells are generally associated with pilgrimage, they are also often depicted in baptismal scenes where John the Baptist is sometimes shown pouring water from the River Jordan over the head of Christ with a scallop shell. The base and shaft may be of a later date, though this is uncertain. Each face of the shaft is decorated with simple round headed panels. This font is not original to Woodlawn church which was only built in 1874, is thought to have originated from the former Church of Ireland church in Ballymackward, but believed to have originated initially from Kilconnell Abbey. A rather unique stone plug in the bottom of the bowl was used to retain the blessed water used during baptism.